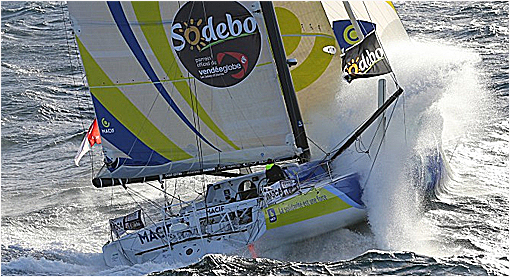 There are many remarkable facts about the 2012-13 Vendee Globe fleet… among them is that although a Farr design dominated the last race only Verdier/VPLP and Owen-Clarke have new Imoca 60 designs competing this time around.

Seahorse: Your design partnership begins this race responsible for all but one of the new designs. Can you still recall Marc Guillemot’s rational when, six years ago, he approached you jointly for your first Imoca 60…

Guillaume/Vincent: The idea of approaching our offices together was to mix fast offshore multihull experience from VPLP with Imoca 60 experience from Guillaume. Marc had identified that with boatspeeds escalating, more and more multihull technology was becoming relevant to these boats, especially around foils and appendages.

SH: So for Imoca 60 projects you work together as one?

GV/VPLP: There is no written contract between us, but the past few years’ collaboration demonstrates just how complimentary this approach has proven to be. Between our two offices we can cover every design aspect to a high level, hull shapes, rigs, structures, fluid analysis, composites, race modeling and meteo analysis etc.

SH: Six of your designs will be at the start in Les Sables and they are all driven by top skippers. What are the main differences across the six…

GV/VPLP: Firstly, we have two different generations of hull. The ‘narrow’ ones (Safran, Groupe Bel and PRB) and the wide ones (Paprec, Banque Pop (ex-Foncia) and Macif). Then within the wide family we have two distinct approaches to the deck and topsides. There are also two different structural approaches employed: single skin was used exclusively in the forward hull bottom slamming area on the first four boats but sandwich was used on the last two (Macif, Foncia). This was not our decision but the choice was imposed on us by the yard and skipper.
Bel is the only boat with fixed rudders in a cassette (which can be replaced at sea). Our other boats all have hinged, movable rudders.
Ballast configurations were refined on all the boats; the later, wider boats use quite a different mix of keel cant and water ballast to their predecessors. We have also gone with two different types of mast: the classic spar and the more aggressive wing mast plus deck spreaders. It is actually rare for any two of our boats to share much in the way of big technical choices; the boats reflect their skippers!

SH: Safran is said to have the biggest budget and Guillaume is certainly working a lot both for and with Groupe Safran. His boat now has a keel fin machined from solid titanium plus a beautiful new mast where the mainsail track is structural (see last month).

GV/VPLP: Regarding the keel, for an Open 60 the more familiar grades of titanium deliver little real benefit. However, in this particular case Groupe Safran had in stock a special titanium grade used mainly by Messier Doughty-Bugatti for aircraft landing gear. The metal has some quite extraordinary properties and it was there on the table available to us! They also have a lot of knowledge at Safran about the particular fatigue characteristics and welding properties of this material, so it was a good opportunity to try something new. From a specific strength point of view we achieved the same performance benefit as a carbon keel. But from a reliability point of view, and knowing that all the welding would be carried out by electron-beam under full vacuum, it became obvious that we would have a gain.
As regards Safran’s new mast, quite a few offshore boats have tried to glue composite tracks onto the aft tube face in the past and it has not always been successful – there is always the risk of peel. It must also be kept in mind that for any number of reasons a solo sailor might not always be able to secure the mainsail at the ‘correct’ hoist positions.
Marc [Guillemot] had a very bad experience in the last Vendee with a classic bolted-on mast track and was forced to climb his rig some 25 times during the race! So for the new mast we used the same technology that Safran employs for aircraft turbine blades. These blades must be able to resist delaminating under impact (for example a bird strike) and are constructed using interlinked fibres, a bit like a woolen pullover. The final rail becomes the aft face of the tube and obviously contributes to stiffness.

SH: Speaking with the skippers, it appears that the top of the Vendee fleet is very close this time and that the speed is especially similar between your six designs…

GV/VPLP: Yes, they all come from the same philosophy: light strong and quite powerful, the more powerful being our last three wider hulls. A Vendée Globe is quite special because the boat must be perfectly adapted to the sailor. Some prefer a boat that is slightly less demanding in order to stay at maximum performance – particularly through transition periods. The boats that are a little more powerful need non-stop attention to perform properly. Since moving sails is very demanding physically, a boat that is too powerful can quickly burn out its skipper.

SH: Are you afraid of Juan Kouyoumdjian’s Cheminée Poujoulat… or any other design?

GV/VPLP: Afraid is not the word. All the boats will be interesting to follow. We believe our designs should be less demanding for their sailors. Cheminée Poujoulat is a nice boat and she brings that diversity we all look for; she certainly suits Bernard Stamm’s hard-driving character.

SH: So does this all mean there is a 99% chance that a Verdier/VPLP design will win?

GV/VPLP: We don’t believe in statistics for this race; the winner is the one who will have the minimum of issues to sort out. Many other candidates are equally eligible.

SH: Guillaume, you have told me before that the Vendee is made up of three distinct acts: 1, racing down the Atlantic; 2, go fast and pray to God not to damage the boat in the South; 3, bring your boat home but take extra care sailing up the Atlantic towards the finish. So does that mean you need a fast boat to begin with (Act 1) in ‘easy’ conditions, and then reliability becomes the objective for the harder acts that follow?

GV/VPLP: Actually the gates in the south make the race quite a bit different to before. We believe that this time it is on the final leg after Cape Horn that the reliability of your boat will really count.

SH: We had a record number of breakages in the last race. Will this one be any better?

GV/VPLP: A race like the Vendee spans such a wide wide range of weather conditions that nothing is ever certain. We try to cover the widest possible span on the Gaussian curve – no boat exists that would reduce your probability of failure down to say 0.01%. Even built in steel!
Considering the multiple unknowns in terms of preparation, engineering, environment, human weakness… to have zero breakages is impossible. We aim to maximise redundancy so that our boats remain able to sail reasonably well (and to the finish) even with quite serious damage. This is certainly the case with the structure and onboard systems – including the hydraulics.
Our teams have been focussed on reliability for at least 12 months. We in turn have been carrying out fatigue tests on all the critical metallic items. Another plus is that we have been successful in encouraging our teams to share their reliability-related information.

SH: So everything is stronger… and yet the boats are lighter and faster!

GV/VPLP: Weight gains are the result of every one of our clients sharing a philosophy and working together to achieve results through intense attention to detail. Then, as the knowledge base increases – and we now have much better data acquisition – as designers we can minimize the risk from the ‘unknown loads’ today in a way that we never could previously. So performance goes up and the safety margins certainly are not reduced…

SH: In my own view the way such refined boats are driven by their skippers will play a bigger part this time than ever…

GV/VPLP: We agree with you, Patrice! It has been the case in every previous edition and it may be even more the case this time since half of the boats share a very similar performance in singlehanded mode

SH: Last question. After the 2008 Vendée, Imoca decided to modify the rules to stop the dangerous escalation in the power of the boats. Do you feel that goal has been achieved and how does it relate with talk of an Imoca one design?

GV/VPLP: It is interesting that many of this year’s fleet do not even reach the maximum power limitation that was introduced – and for very intelligent reasons. Singlehanded ocean racing boats, especially monohulls, are physically extremely demanding when you are trying to optimise the sails in use at any one time. Just lifting a foresail of more than 50kg is such a pain that you think twice before taking action. And if your boat is 10 per cent stiffer, then the sails are heavier and so you tend to become lazy.
The action taken by the class did well to stop the UFOs that were approaching… Heavy, immensely powerful boats really only suitable – and safe – for a big crew. They also did well to limit mast height for the same reason. However the best solo sailors know what they are capable of physically and they were already setting their own limits. But Imoca put in place some useful safeguards for the uninitiated…
In future, whether you go one design or with an evolution of today’s rule, perhaps with a few more restrictions, either way you will produce the same result. Both paths have good and bad points. But ultimately a sailing race around the world is a mix of human and technical sport. It should be compared with, say, the 24 hours Le Mans in car racing… however much you refine everything the human and technical risk will both always be there.

Guillaume and Vincent were talking with Patrice Carpentier : ttp://www.seahorse.co.uk