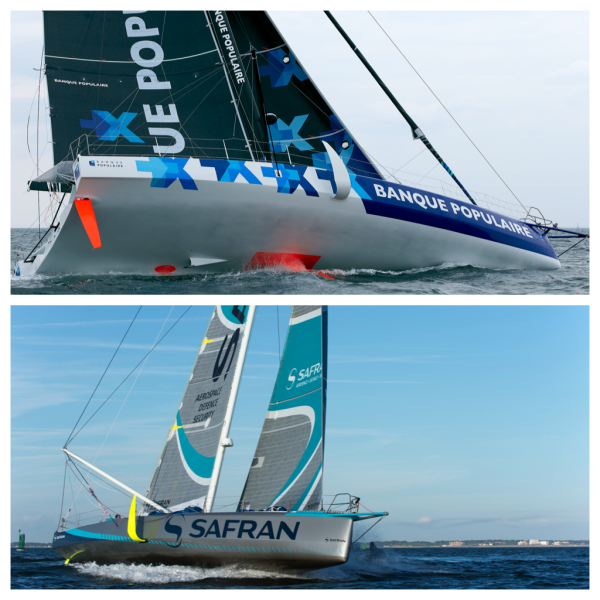 After two fruitful campaigns in the IMOCA class, including the top two spots in the last Vendée Globe, VPLP and Verdier are proud to be collaborating once again in the lead up to the 2016 edition of the famous round-the-world yacht race.

Safran and Banque Populaire set the ball rolling for this new collection from VPLP Verdier, with the teams sharing the investment prior to the new rules coming into force.

They wanted to find the answer to the following question: How do you considerably improve performance while complying with the constraints imposed by the new IMOCA rules whose complex nature means the older generation boats will not be subject to the same restrictions as the new ones?

With the introduction of partial standardization, research carried out by the partner design teams focused on the dynamic criteria of the class to improve performance.

How do you increase power whilst lightening the boat through speed?

Hull shapes are radical and more powerful with a lower chine and a full bow, and are designed to sail heeled with minimum drag.

Structure is much more refined, more complex and lighter to compensate for the increased weight from the mast and the keel, the latter both being one-design components imposed by the new rules.

Adding foils is the natural evolution and continues to hold promise, but the IMOCA rule evolution makes things harder, indeed the number of appendages is limited to five.

So we had to design a foil that produces both a transverse force (the force which prevents drift) and a lightening vertical force, applied from the outside, in the lee of the boat, to make her more powerful.

Also, this new rule with its one-design criteria has resulted in slightly heavier boats than those of previous generations. This is a disadvantage in light airs but in strong winds the boats will rely less on water ballast, which means less weight overall.

Six boats, some of which have already been launched, are the fruit of this reflection and can be placed in three distinct categories.

The first category comprises Safran and Banque Populaire 7, both built by CDK Technologies, and Vento de Sardegna by Persico in Italy. All three are based on the same hull shape whose main characteristic is its capacity to produce power when reaching. But the similarities end there. General arrangement are laid out differently on each vessel, as are the the deck layout, in accordance with the brief and objectives of the skippers.

Nevertheless these five IMOCAs share the same foil philosophy as the previous ones and, in compliance with the rules, a similar sail plan. They all went for the one-design wing mast.

Category number three comprises Hugo Boss, built in England by Green Marine. Her skipper Alex Thomson and his technical team have put some unusual ideas into the mix and, once the design phase is complete, she should be the most radical of the six. Choosing the “new wave” of foils, developed in house by Hugo Boss design office, dictated the main options, such as the breadth and the shape of the deck in the forward part of the vessel.

After eighteen months’ work designing and monitoring these six boats VPLP and Team Verdier can now enjoy some well-earned downtime… The coming months will certainly provide us with new insights into the use of foil and how we can improve versatility.