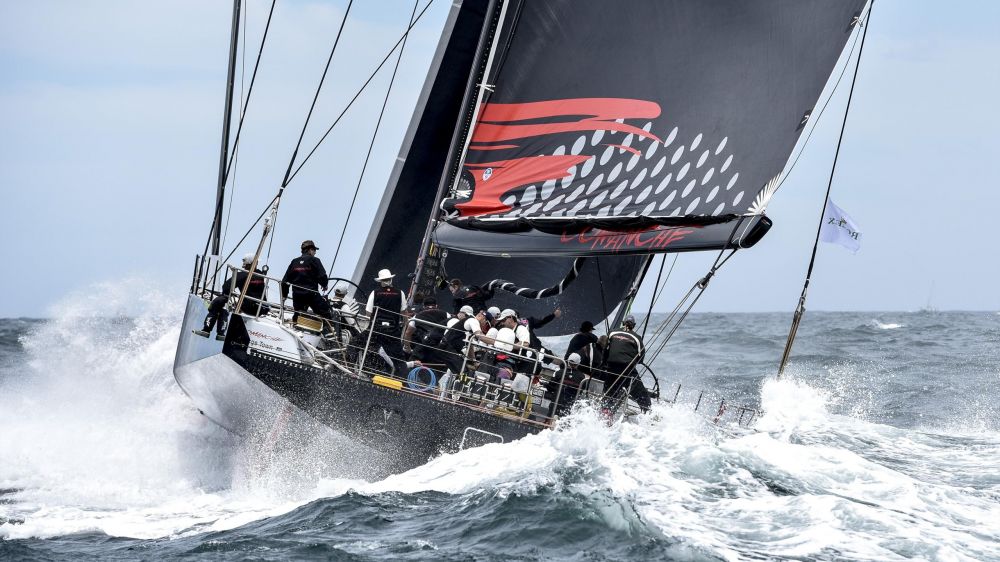 Comanche had left New York (USA) on July 22 at 20:58 UTC in hopes of breaking the monohull transatlantic record from West to East (Ambrose Light Tower to Lizard Point) of 6 days 17 hours 52 minutes and 39 seconds, set by Mari Cha IV in October 2003.

Comanche’s owner Jim Clark said: “Comanche was built to break ocean records and the guys have once again powered our fantastic fat-bottomed girl to another title. I am so proud of the entire team and everyone involved in the entire program from top to bottom, the best in world, getting the best out of Comanche. Perfect harmony, and Kristy and I are over the moon.”

Comanche had been on standby for a number of weeks waiting for optimum conditions to slingshot across the Atlantic, managing a fluid rota of over 30 world class sailors on standby over a three month period, primed to be ready at a moment’s notice. On July 21, the team was moved to a ‘green’ as world class navigator Stan Honey alongside skipper Ken Read, agreed that this was the time to go.

Ken Read concluded: “This latest record is testament to Jim and Kristy’s vision. This is the culmination of six years of hard work and a huge team of experts offshore and onshore all working as one. I never had any doubt this crew would deliver the goods – the boat was in perfect condition and the only thing that would scupper the record would be Mother Nature. Luckily she didn’t throw a spanner in the works and this team have once again proven why they are some of the best in the business.”

The weather window promised fast conditions with strong winds, great angles and flat seas all the way to Europe. And overall it delivered, enabling the team to tear across the Atlantic in record time, using only manual powered winches and hydraulics.

But it wasn’t all plain sailing, the crew encountered some cold, foggy and squally weather with some nail biting lighter patches that kept them all guessing and hoping that they could stay in the same weather system for the duration of the crossing. They also encountered the danger of ice ensuring the team remained on high alert making the trip, and the record, even more of an achievement.

Quotes from the boat:

Casey Smith: “What a boat! Now we have got the 24 hours record, the Sydney Hobart, and now the transatlantic. What a boat! Awesome!”

Stan Honey: “There are only about two weather windows a year where a monohull can make it all the way across the Atlantic in one system, and we found one of them. Beating this record by more than a day is above my expectations and I am delighted.”

Tony Mutter: “To achieve something like that, it is important to be fast and reliable. I am happy for all the people involved in this project from the very beginning up to now.”

Richard Clarke: “Delighted. Awesome trip, I have been loving every minute of it. Now I am proud of the accomplishment for the boat and for the team.”

Pablo Arrarte: “I think this is something big. I don’t think anyone will beat it in the near future.”

Shannon Falcone: “This was sort of the Everest of the whole Comanche program, and I am both proud and delighted to be part of it.”

The record continues to illustrate Comanche’s pedigree since the Supermaxi was launched in October 2013. Comanche has taken line honors in all races but one entered and currently holds four ocean records.

The new record must still to be ratified by the World Sailing Speed Council.

In 2015, Comanche set the 24 hour monohull distance record of 618 miles as they raced across the Atlantic (at an average speed of 25.75 knots). Comanche crew for the Transatlantic Record Attempt:

Maserati Multi70: into the water, ready to fly