A new boat will be built for Alex Thomson for the 2016 Vendee Globe ! The new HUGO BOSS will be launched in summer 2015 and will be a VPLP/Verdier design. A very exciting time for Alex Thomson and the Team ! 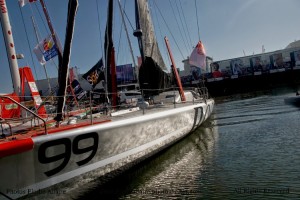 The Team aims to put Alex Thomson on the start line of the Vendee Globe with a boat that is good enough to win.

Whilst the IMOCA class have made a number of rule changes to increase the reliability and reduce the costs of the class, the investment is still upwards of €3million. The Alex Thomson Racing Team have been sponsored by HUGO BOSS since 2003 and have secured continued sponsorship until 2018.

The Team have chosen Guillaume Verdier and the VPLP Team to design the new HUGO BOSS. Technical Lead from Alex Thomson Racing, Ross Daniel said “To date we have had an incredible experience with working together with Guillaume and Vincent at VPLP/Verdier. These guys are incredibly down to earth, extremely talented, and have a passion for creating winning IMOCA boats.”

Aware of the importance of delivering the project on time, on budget & to quality, the Alex Thomson Racing Team understand the significance of having the right project manager and the right builder to lead the project. The Team are currently in negotiations with Hythe based Green Marine to complete the build. The boat will be launched in summer 2015, withthe objective to be race ready to compete in the Transat Jacques Vabre in late October 2015.

With the IMOCA rule still essentially an open rule, where aside from the one design mast and keel, the designers and the teams are still able to seek competitive advantage through design and build. A key element in producing a successful build is to be willing to take some risks and innovate. The hull shapes of the 2016 Vendee Globe IMOCA 60s are likely to be an evolution of the current boats, but one area that has seen significant R&D is the new types of appendages.

Lastly, the Alex Thomson Racing Team believes it is crucial to ensure the build is in phase with the competition. There are four new boats that have already been announced- Safran, Banque Populaire, Groupe Edmond de Rothschild and Saint-Michel-Virbac. These teams are in various stages of design and build and will be hitting the water from January through to late summer 2015to compete in theOcean Masters circuit and the Vendee Globe 2016.

“We want to take advantage of the very latest design thinking, but also get the boat in the water early enough to ensure reliability. We have a simple objective and that is to put Alex Thomson on the start line, with a boat that is as good, if not better, than all the other boats that will line up on the Ocean Masters circuit” said Hosford.

In the meantime, Alex Thomson is preparing to take on the Barcelona World Race, the double handed, non-stop, round the world race, on December 31st 2014 together with co-skipper Pepe Ribes. Alex’s perspective: “We have worked hard to put together the right combination to make a successful project. We feel that we have put ourselves in-phase with the right designers and the right team internally and externally to be fully competitive through this cycle. I feel honored and privileged to have this opportunity – I cant wait!”